No matter how hard Apple or Adobe try build in flickr or Facebook export options in photo application they never really cut it with me. This is particularly relevant in the case of Apple Aperture that for some reason insists on keeping a ‘relationship’ with the file once it has been exported.

As many of you know I am a massive fan of Flickery (read the review here) but if you are an Aperture user and have a flickr account then there is only one plugin that I honour with the grand title of “essential”.

FlickrExport by Connected flow is available for both iPhoto and Apple Aperture and has to be the best “in-app” flickr export I have used. As well as obviously it lets you export your images directly to flickr it also offers a number of really nice features to boot.

Once you have installed the plugin (a matter of double clicking on the installer) and authorised your flickr account you can freely upload your images directly to your free or Pro flickr account. FlickrExport comes with a range of export options: 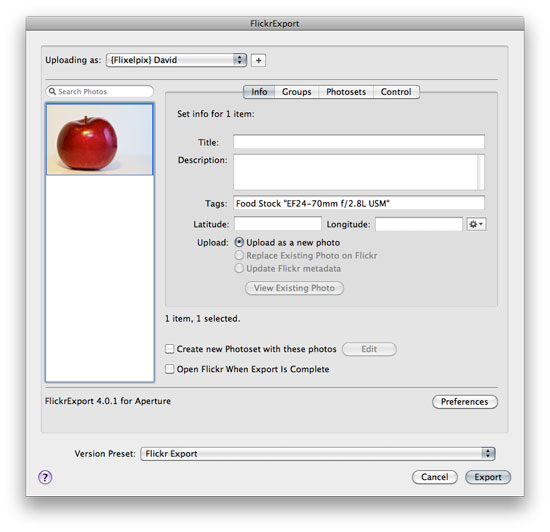 The first stage of export is naming, describing and tagging your image. As you can see from the screenshot the plugin has pulled my Aperture keywords and it has also neatly added the name of the lens used as a tag automatically. Although you can turn this off it is a really nice way of managing your library later and seeing which lens you use most.

FlickrExport downloads a list of the groups you have joined on flickr. Select an image on the sidebar and simply tick the groups you would like the photo added to once it has uploaded. If you have reached your limit for a particular group the name of the group will automatically turn red.

Like groups FlickrExport allows you to manage the photosets an image will be added to on upload. This is great if you use a range of different category type photosets. I set up a Macro ‘set’ two years ago and due to the set’s age it is right at the bottom of the list. With flickrExport accessing this set is as easy as scroll and tick. 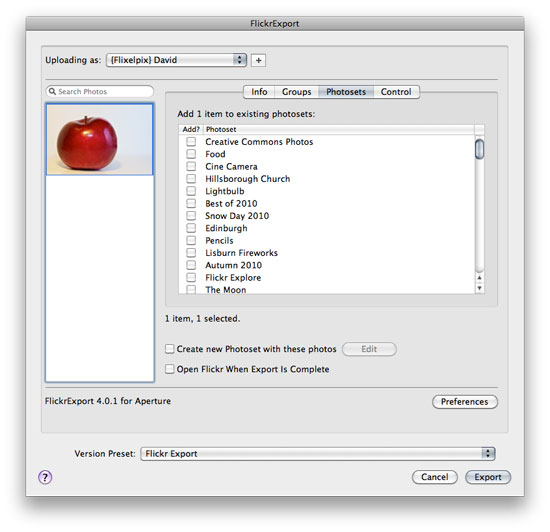 Once you have set the various preferences for a photo simply click the ‘Export’ button and the plugin will do the rest. If you are uploading a large number of images FlickrExport will notify you of each successful upload via a growl notification.

The goodness doesn’t end there. FlickrExport has a number of really nice features hidden away in the preferences. First you can set the plugin to add an additional keyword to an image metadata in Aperture (e.g. the word ‘flickr’) so can easily search Aperture for those photos you have uploaded to flickr. Better still the plugin allows you to save the URL on the photo on flickr as an additional field within the meta.

FlickrExport is near perfect for iPhoto and Aperture. For me the single negative with FlickrExport is that there is no Adobe Lightroom version. It truly covers every aspect of exporting to flickr I would ever want or need but at the same time lets me easily manage and tag the work that has been uploaded.

If you use Aperture and use flickr, you need it!