Hard headed scientists give me complicated reasons why time travel is not possible such as “it’s impossible to reverse Entropy”! Being human however, my heart still wants to cast a longing lingering look behind and wish “if only I could return to some of my fondest memories in another time and another place!”

For me, there is one such place and a much loved city. On a recent visit I found that the city has grown, aged, become overcrowded and horrors! even changed her name from Bombay to Mumbai! Yet, I found some people, some atmosphere and some food to remind me of bygone days full of that warm fuzzy feeling that nostalgia is all about!So join me as I take you back in time and show you some of the landmarks, their history and the ambiance that was once truly Bombay, India!

Why not start with a fondly remembered breakfast at Kyani and Co.? The old-world charm of home-baked bread and earthy tea called chai in India represents a dwindling legacy of the unique establishments called Irani Restaurants that once dotted the city’s landscape. Now very few in number, of the ones that survive, perhaps the oldest is Kyani’s located in the heart of South Bombay, favored by college students, professionals and old Parsee patrons alike.

Founded in 1904, by Mr. Khodram Marezaban, Kyani’s still invokes an unforgettable old world charm and a past redolent with grace. At the entrance there hangs a stout rope suspended from the top lintel to help the not so spry elderly clientele still eager to start their day with the very affordable buttered bun and strong tea. The ambience is uniquely Parsee Zoroastrians who settled in India 1300 years ago. Fast dwindling in numbers, they are a special part of Old Bombay. 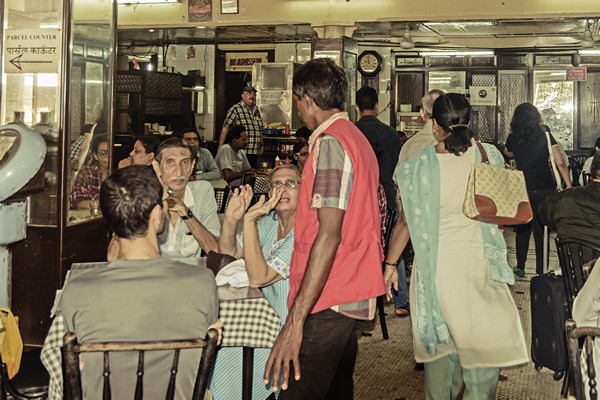 Built a year earlier and about 3 miles away, stands the more famous landmark hotel of Bombay, the Taj Mahal Hotel or simply, The Taj. Hosting princes, heads of state, presidents and film stars during its long and checkered history, the hotel is a “Heritage Grand” class five-star hotel. From a historical and architectural point of view, the two buildings that make up the hotel, the Taj Mahal Palace, and the Tower are two distinct buildings, built at different times and in different architectural styles.

The hotel’s original building was commissioned by Sir Jamshedji Tata and designed by an Indian architect, Rao Shaheb Vaydia. The hotel first opened its doors to guests on 16 December 1903. Originally the main entrance faced opposite to the sea, where the pool is now situated. Thus, all the rooms had an unrestricted sea view from their rear windows. Later a sea facing entrance was added and now the hotel is always viewed and photographed from that side. The Taj Mahal Tower, an additional wing of the hotel, was opened in 1973. It was designed by Melton Bekker.
The Taj Mahal Hotel’s name is now forever etched in Indian memory as their own 9/11, when terrorists attacked the hotel on November 26 2008, along with another hotel, a cafe and a railway station nearby. The roof of the hotel was damaged and hostages taken. At least 167 people were killed including foreign tourists. However, the damages were fully repaired and the hotel reopened in less than a year. The hotel continues to remain iconic and is representative of Bombay’s indomitable spirit. 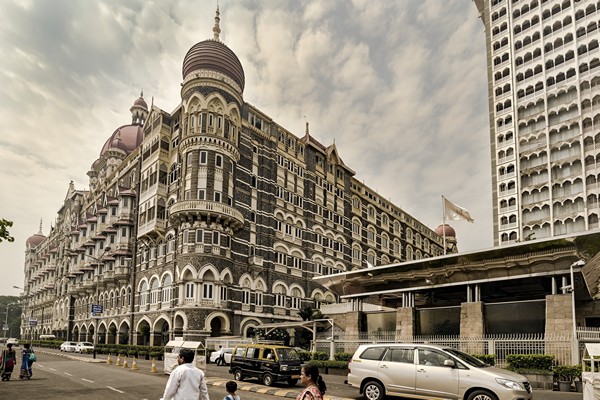 Today, the building is classified a heritage structure. Heavily influenced by Greek and Roman architecture, the entrance has a portico with eight Doric columns. A flight of 30 steps lead up to the Town Hall and a wrought iron divided Regency staircase climbs up to the vestibule. In 1830 Sir John Malcolm, governor of Bombay stated: “It is the most magnificent structure that taste and munificence combined have as yet erected in India.”

Inside, the Reading Room is high-ceilinged with a dramatic wrought-iron spiral staircase and marble statues of notables. Originally, the library was a Town Hall for the walled city that the British had built for themselves. Today, it is a reading room and library, hall for debate and a museum. The museum’s prized possession is the second original manuscript of Dante’s Inferno as well as many other rare and valuable books. 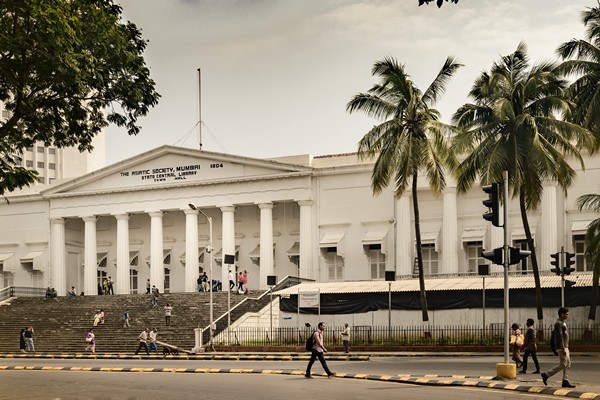 However reluctantly, one must return to reality and the present. In parting, let me leave you with the puzzle of the city’s original name, “Bombay”. Was this derived from the Portuguese “Bom Baya” meaning beautiful bay, perhaps a legacy of the Portuguese occupation from 1534 to 1661 or is this a mystery yet to be explored?

–
By Jayant Neogy – I am a student of travel photography, still searching for the perfect shot of the perfect scene!. Soldiering on with my trusty D800