It was Edgerton who discovered that trying to capture translucent liquid splashes was nearly impossible and thus moved to creating the splashing using milk. Although I have made previous attempts to create the perfect crown (and failed, see here and here) I decided to carry out some family experiments with milk. 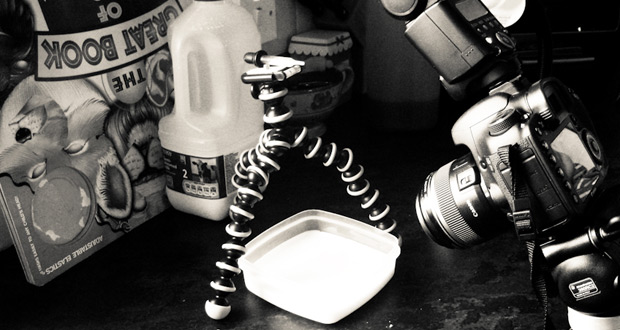 The set up was reasonably simple and very make shift. A small tray of milk, a dropper pump, macro lens with strobe and a gorillapod to rest the dropper on to ensure consistent, or almost consistent placement of the drops.

We took around fifty photos using our now tried, tested and patented 1,2,3 technique. The dropper is pressed at 2 and the shutter pressed at 3, the tricking is saying 1,2,3 at the same rate each time. A small desk lap is slightly out of shot to offer some consistent fill lighting.

Although the resultant photographs aren’t necessarily visually pleasing and in fact have a bit of a retro seventies feel they do capture the behaviour of the moving liquid really well. If you want to push the boundaries then why not add a flat surface and some food colouring to the mix.

It is really interesting to see some of the different shapes caught as each drop of milk made contact with the pool. One thing is for sure, kids really love taking part in this type of photography as despite the best intentions the mess is equally as spectacular as the end results. [Splash Set on Flickr].