In this article you will see that you don’t necessarily need to spend a lot of money to photograph closeup.

I’d like to start with an idea that isn’t considered too often. Using a telephoto lens, zoomed to the furthest focal length to catch an object up close and personal. For example, quite often I use my Nikon 24-70mm or 70-200mm lenses to capture closeups of flowers. This is usually because I’m out on a photowalk without a macro lens. While I do have a Nikon 105mm micro lens, it’s not a lens I typically bring with me on a photowalk.

My article, Don’t always photograph flowers with a macro lens, shares three photographs of flowers all captured with the Nikon 24-70mm lens. They aren’t the closest flower photographs but it is the idea behind it. In June of 2010 I was in the middle of a Project 365 and shared another example. This time it was a closeup of a dandelion. 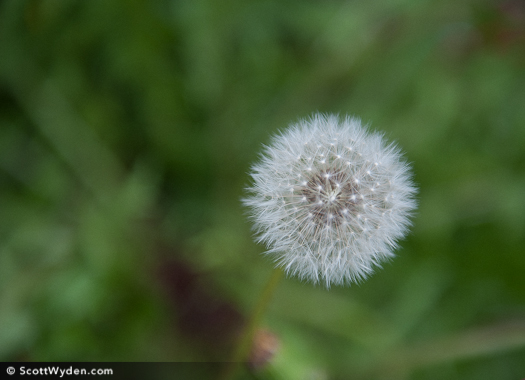 Also photographed with the Nikon 24-70mm lens, the detail in the flower is stunning and the depth of field is perfect. If I used the macro lens, most likely there would be no surroundings to the flower, which for me would be too boring.

The thing to remember when photographing a closeup shot with a telephoto lens is that you will likely be standing a lot further away than you might expect. If you plan on trying it out, here are some tips:

Using Any Lenses for Closeups

I hope that these tips will get you out shooting more closeups because they can be so much fun. You most likely already have most of the gear you would need to do it, so there are no excuses. If you do not have telephoto and want to try the lens reversal trick, I recommend picking up a reversal ring so securely hold your lens in place. I also recommend using a prime lens (e.g., 50mm, 85mm, 35mm, 24mm) for your lens reversal macro as it is the best choice.