When I was four I discovered ants following each other on our brick patio in San Francisco.  My naked eyes are like microscopes.   I spent a lot of time laying on that patio floor and studying them.

I wondered how they knew to follow each other and how they knew where to go when the other ants were out of sight.  I’d experiment by removing a tiny twig in their path to see if they could still find their way.  After a few seconds of confusion, they did.

I wished more than anything that I could put them in a miniature doll or “ant house” and feed them and put them to bed at night. That led to my interest in real microscopes and a whole new wondrous world opened for me. 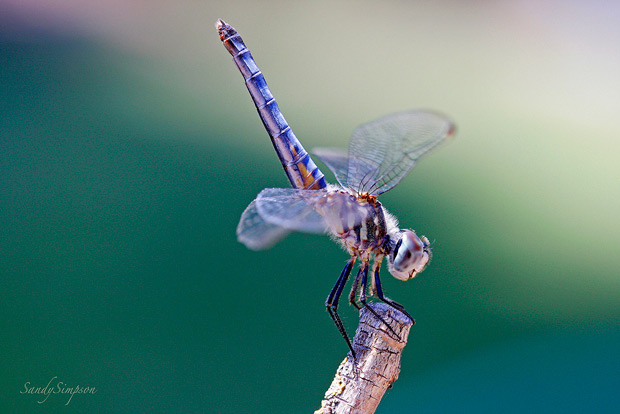 I’m that person who always had (and still has) a camera in hand and all my photos were “snapshots”, mostly of family.   Then I got a decent camera and one day I took photos of a spider and its web and thus my love of macro insect photography began.   I’ve only been really serious about it, as far as constantly trying to improve, for about three years.

I never use a tripod.  I like to be free.  During damselfly season, you can find me slithering around on my lawn (wet or dry) exactly like a snake, slowly following a damselfly from one piece of grass to another.  If I happen to be wearing a nice outfit and I see a damselfly and the lawn’s wet, well, tough luck for my clothing!

My specialities are whimsical insect photos and dragonfly photos.  I feel like I know insects and spiders as well as someone who has a degree in entomology.  I understand them.  I know how to approach them.  I know the rituals of the Jumping Spiders.  I know the dragonflies are as fascinated in me as I am in them.  I’ve stood in triple digit weather for three hours straight to get one photo of a spider.  That’s all the elusive spider would allow me.   Spending so much time with insects, I suddenly realized how much I understand them.

Most people see a plain brown Stink Bug and think it’s ugly.  I see, once I upload my shots, a perfectly made creature with intricate patterns in many colors.  I see, as I’m looking at the enlarged image, that it was looking at me when I took the photo.  You may find little black dots on a petal of your rose bush.  They aren’t specks of dirt, they’re beetles with all of their body parts and lives as complex as their larger sisters.

I am one of the rare photographers who won’t tamper with nature—at all.  I want the real thing.  I don’t “bait” them by putting out honey or by moving them to a better location.  There are many macro inspect photographers that are better than me, but few who love insects as much as I do.